Put my arm into a Rabbit Hole right by the house and in it went up to the elbow. 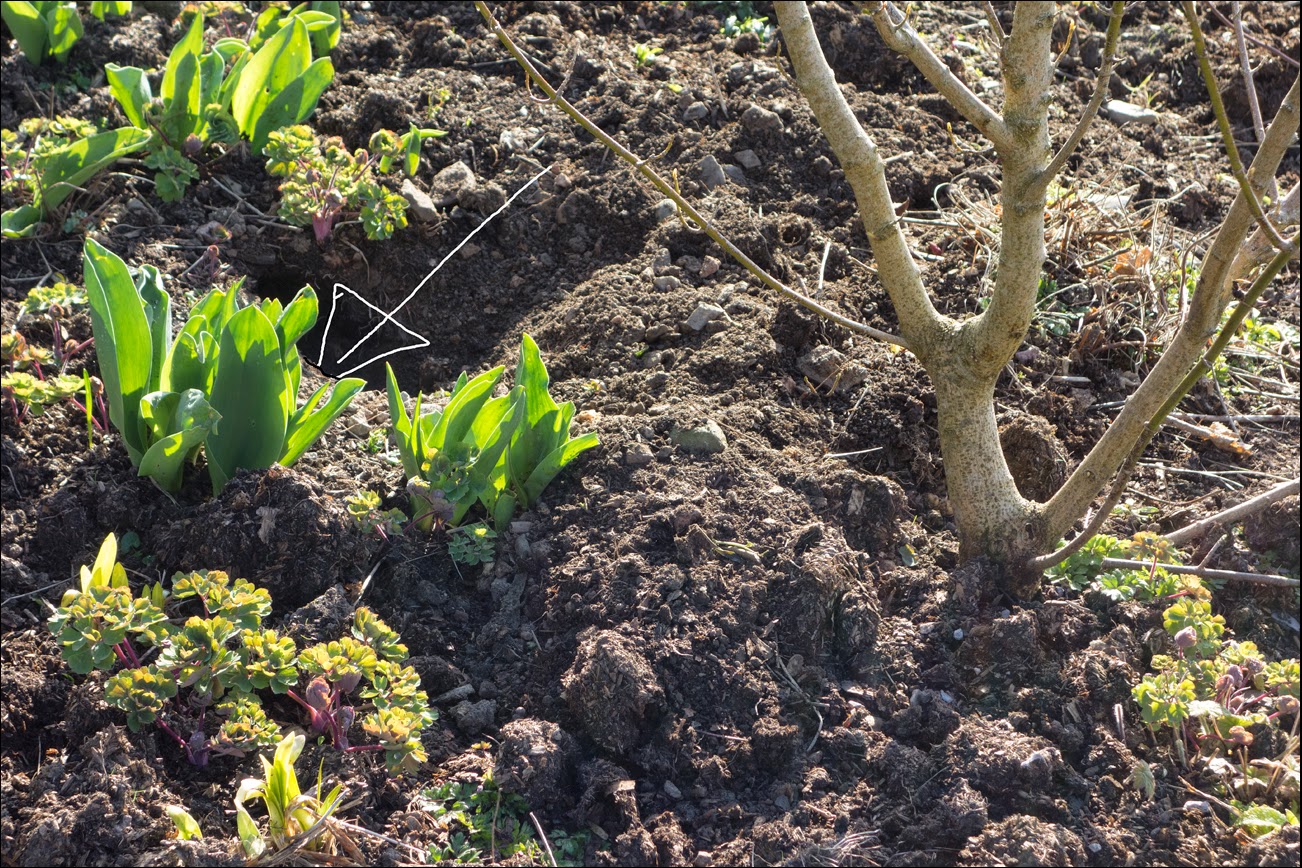 There are rabbits (and squirrels) everywhere this spring.

And, to be more annoying, many of the lovely daffs on the banking are blind - have no flowers.

I suspect this is due to the long hot dry summer last year - I hope. If the weather is thew same this year (some hope) then they will need watering. 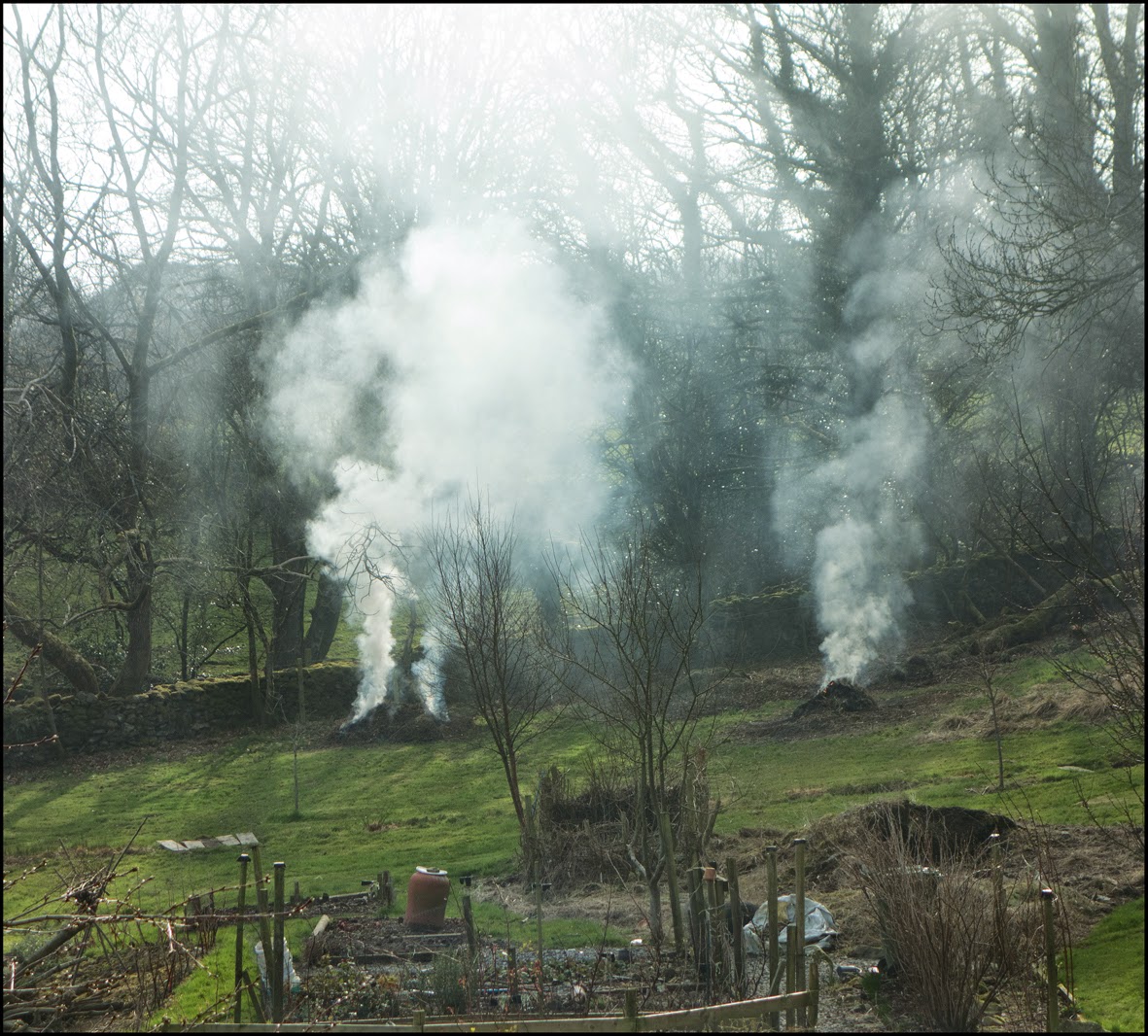 We have been having the usual antisocial bonfires with lots of thick smoke. You go out, think Ah! the wind is blowing up the field, light the fire and then the wind turns and blows the smoke straight at the neighbours. I also burned the long grass wherein I hoped my signet ring might lurk but nothing there - shucks!
In the debrambled far wood I have been extracting rusty metal and glass and a broken sink and there is even an engine - well a cylinder block - so heavy I think we will either have to bury it or make it a feature - plant the cylinders up with flowers - ?

Have just been down to the recycling centre with scrap metal and other rubbish. (And had my hair cut - it does make the ears seem very big.)
R has finished all the arable removal so now I have to take out a barbed wire fence by the wall and repair the dry stone wall - cue for a pome -

There is a rhythm in a wall -
runs with the land.
It grasps the raise and fall
of rock and fell.

His hands are leathern,
ingrained with earth.
His nails are chipped,
his fingers kinned.

Every stone has its place
complements every other stone.
Once lifted each is laid so weight
and rain are shed, none discarded

He stoops, eyes gauge
the stack of slate.
His trunk bends and climbs,
arms heft a slab.

He steps back and stretches,
says nowt, grins,
slaps on his cap,
nods, job cracked.

To move on -
this is a composite panorama of the garden from the far end. On the left the cleared area and bonfire remains, the veg/fruit beds in the middle with the house and the pond, Wendy House and white birches on the right.

And, to finish, after all the rabbits and squirrels, ducks on the pond eating frogspawn and so on the lamb gangs are out under the field gate romping on the old manure heap.

And John Renbourn is dead - master of the folk guitar. I remember searching Liverpool for him before a concert at the Students' Union as he had gone smoke-about.

Posted by Duncan Darbishire at 17:09 No comments:

A glorious day - Saturday - sun shining, had post lunch tea sitting in the garden in the sun - cool breeze but once in shelter - !

Above is the far garden from our bedroom window, wood on the right, veg and fruit beds to the left, daffs on the banking (and all over the place). And then the snowdrops on the top banking before they were over.

Today AS came and left with 2/3 of our copper beech hedge - all we could extract - for his new house and garden. As we got our other beech hedge from him - fair exchange. R and I transplanted snowdrops as they are over. This is best done whilst they are "in the green" and bigger clumps are dug out, split in half and half put back. The other half is split into three parts and planted elsewhere in the garden. Some of this is by paths, some on the banking and some where the bramble lady has been clearing. 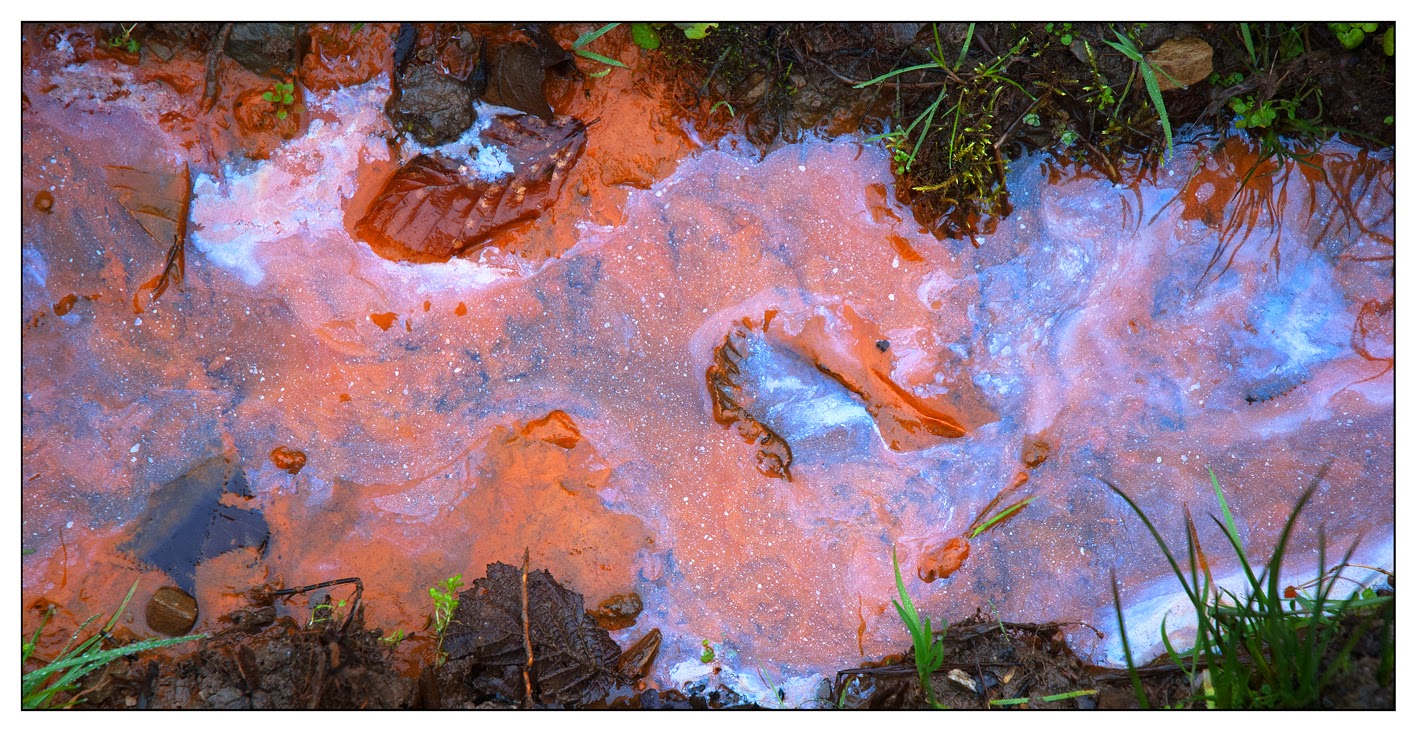 Some of the drains/ditches have strange algae on them - orange and fluorescent. At first I thought this was pollution from some buried junk but I was wrong.
(Actually the bramble lady has reached to the far wall and found a tip - metal, glass and the remains of two push mowers up to now.) 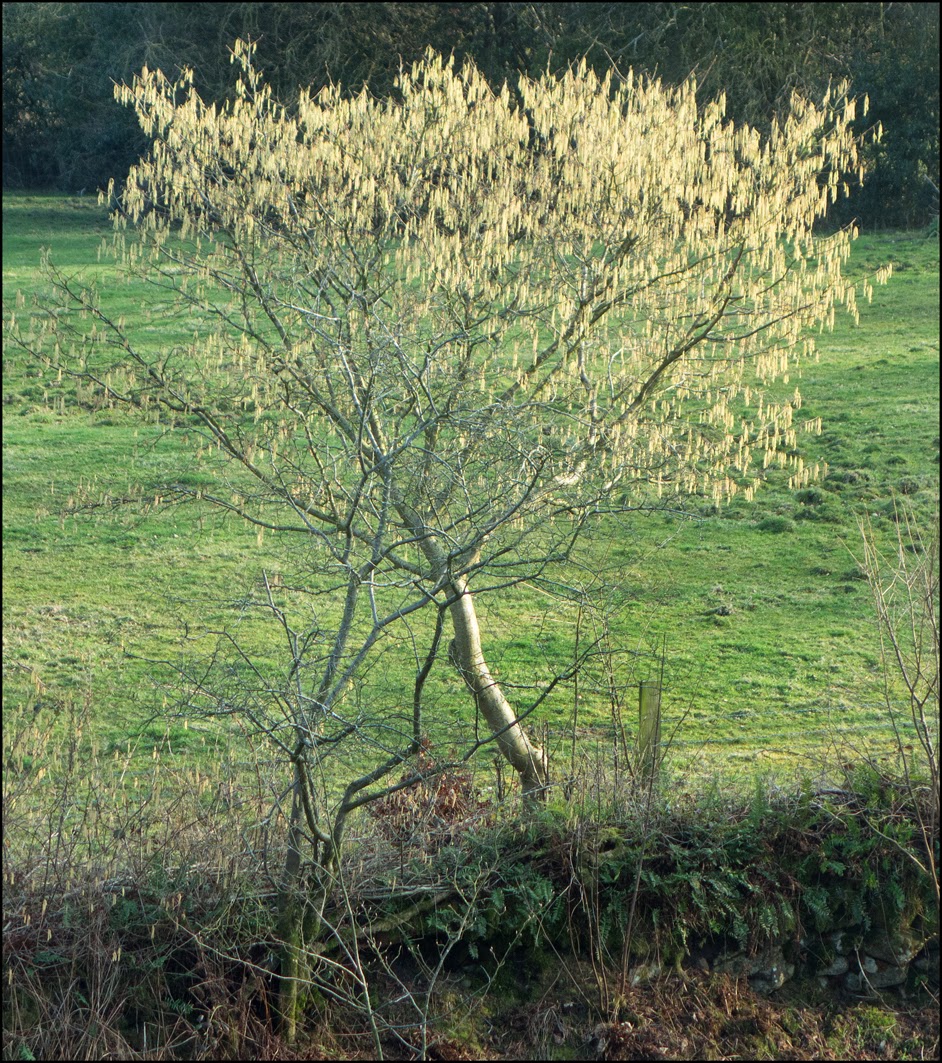 The hazel in the bottom hedge has been a shower of golden catkins for a few weeks.
I have been doing the stream and hedge bank removing brambles, ferns, honeysuckle and such and the lawns have been mowed. I had the mower and its trailer out too and shifted manure which was spread on the banking bed beneath the house. I also raked off the bramble cleared area.

Earlier in the year R bought some gladioli bulbs at the Greenodd potato day (I know) so these have been planted up un pond baskets and compost so they can be put into the flowerbeds to fill any gap later in the year. 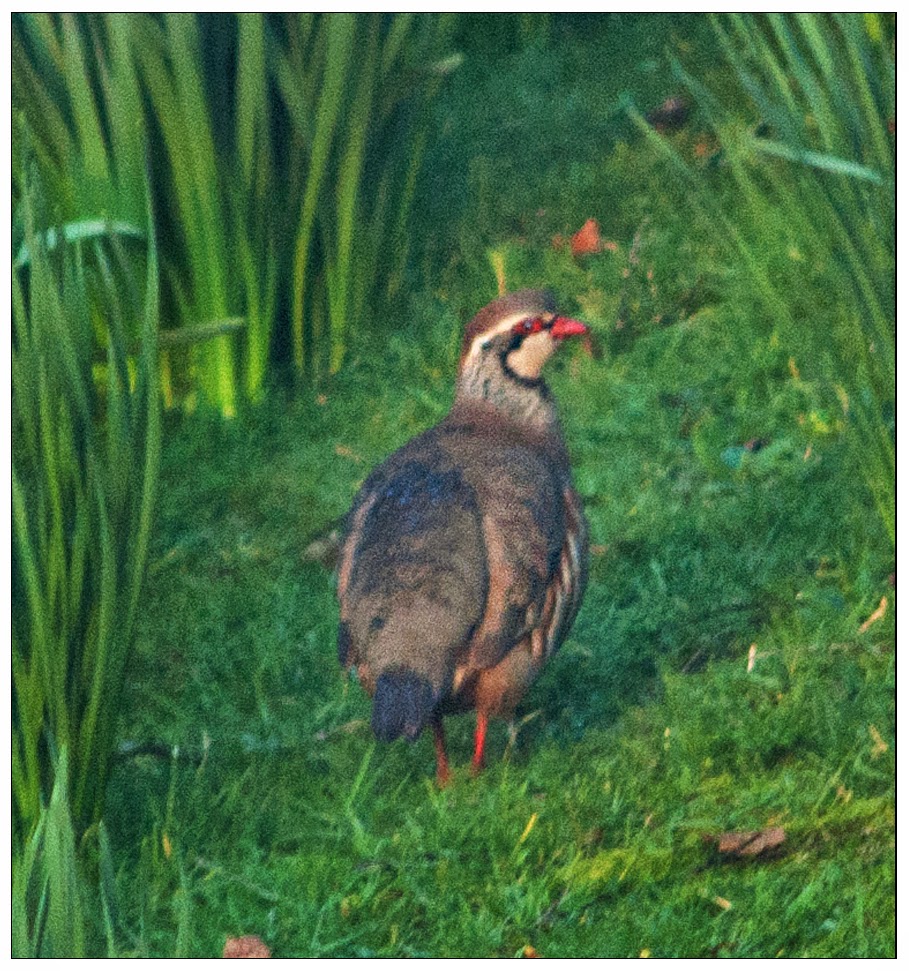 Now for a little tale regarding birds. We have had red-legged partridge in the garden and in the field below the house. In the field there were three males and one female and the lads were going at each other like Don Cockell and Rocky Marciano. (Whoops, dated myself.)

They were so absorbed with themselves they did not see Miss Partridge quietly wandering off and leaving them to it. (No relation of Alan Partridge who has a place in Coniston.)

Talking of birds we are beset by a blackbird again - no, not the house windows but the cars. It is attacking its reflection in the car windows and wing mirrors and covering everything in white youknowwhat. Not good for the paint.

What else?
The past-it bulbs in pots have been planted out down by the log pile and path to the Wendy House.
No sign of my ring.
Another grey squirrel relocated.

Saw the solar eclipse - at exactly the right time it appeared through misty clouds for about 15 seconds - we got about a 95% cover here. It went darkish and coldish and quietish and as I was standing on the first tee at the time I then hit a not too baddish drive up the hill into the murk.

Now, when I was a lad clattering around the boys' yard at school in the rain and cold we had nothing like this -

School Class on the beach at Armacao de Pera - an irresistible photograph.
Today it is 16C and stormy in Faro on the Algarve - it maybe only 10C here (Sunday) but the sun is warm and shining from a clear blue sky. All right there was a frost last night but I am now going to sit outside in the garden with the newspaper and have a coffee, listen to the birds singing and try to forget all the things that need doing in the garden.

Posted by Duncan Darbishire at 09:18 No comments:

BLOGGED OFF TO PORTUGAL


Just back from the Algarve and now you want a blog!! 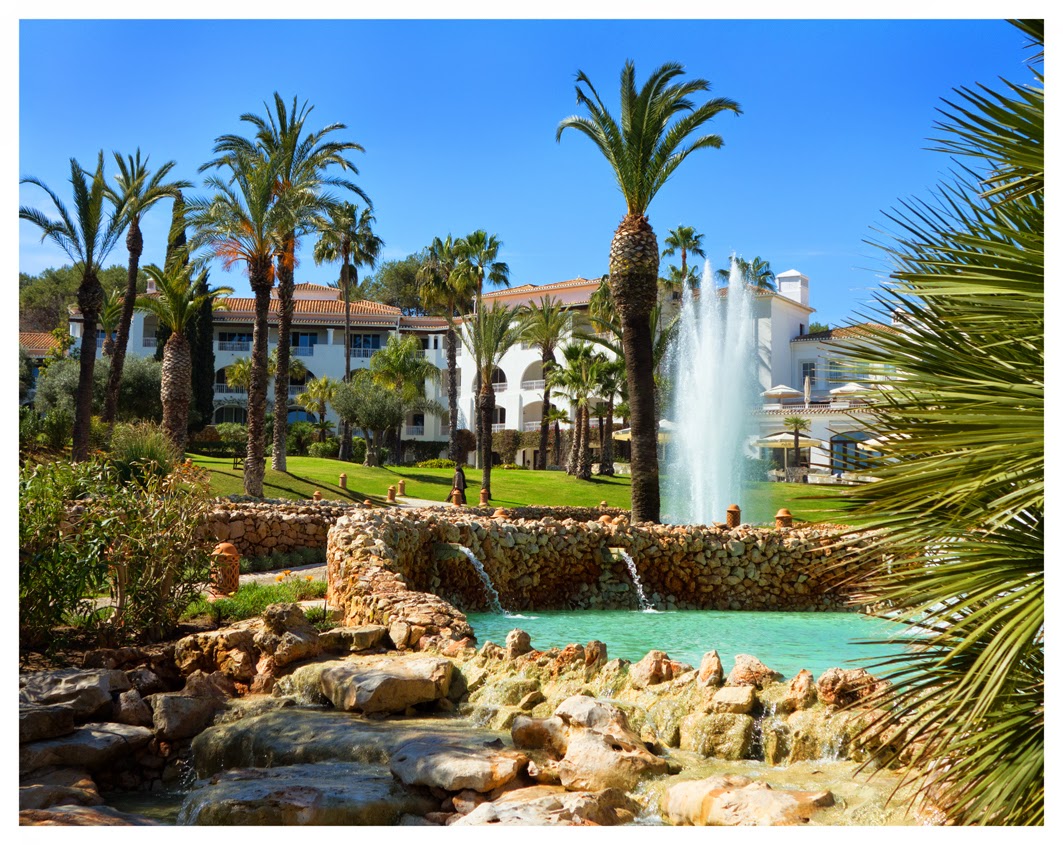 We are back in the old grey country but her is a pic of the hotel grounds to make you all jealous. 22-23C every day - sigh!

Then on the way back as we sat in the bus at Faro Airport waiting to go out to the plane I said to R, "You know, we have not met anyone we know!"
Then AT and J climbed on and all that was past history. Then we found they had the seats right in front of us on the plane. 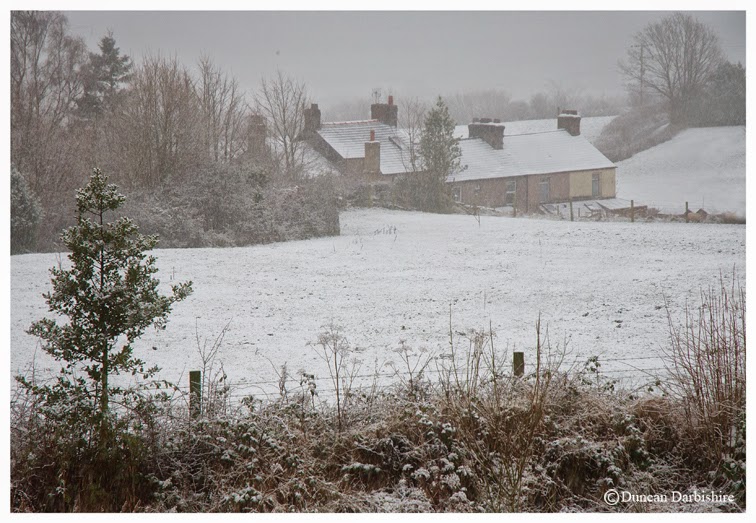 and here is how it might have looked except I took this last year.

Mind you the daffs will be all out soon and the snowdrops over and ready to be divided and replanted. 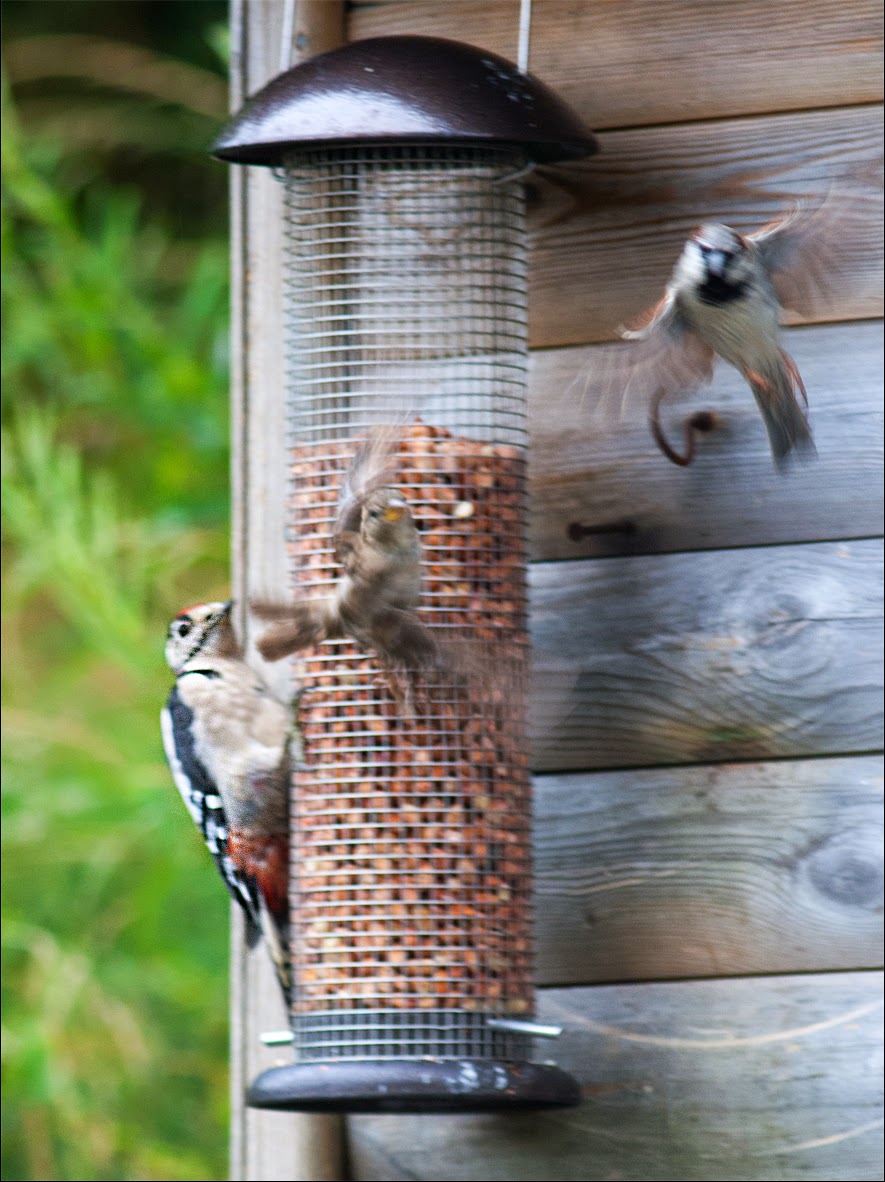 The woodie has been terrorising the smaller birds, and the blackbird attacking the back window. 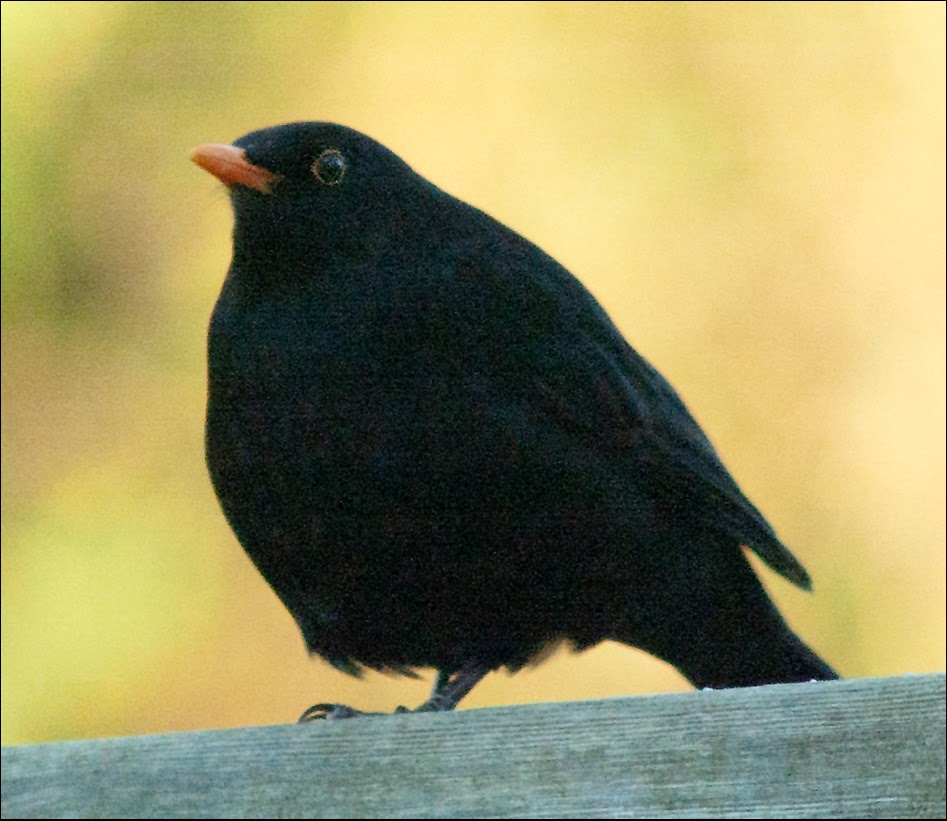 When we are in the kitchen we can hear birds that are on top of the Aga chimney - usually collared doves but this morning crows letting us eavesdrop on their conversation.

And all the grey squirrels carefully relocated around the district have returned. 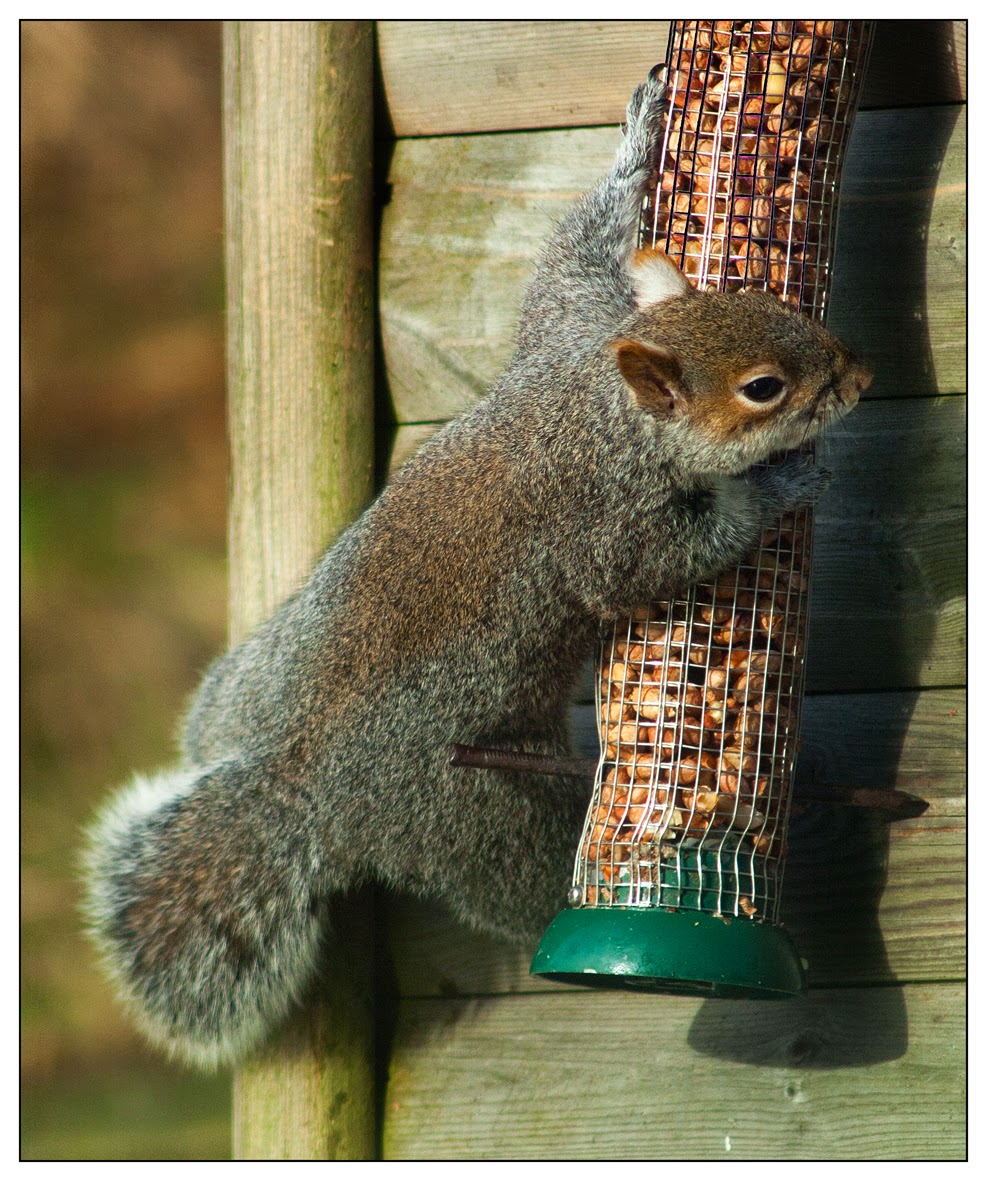 And there is much muck to be moved. 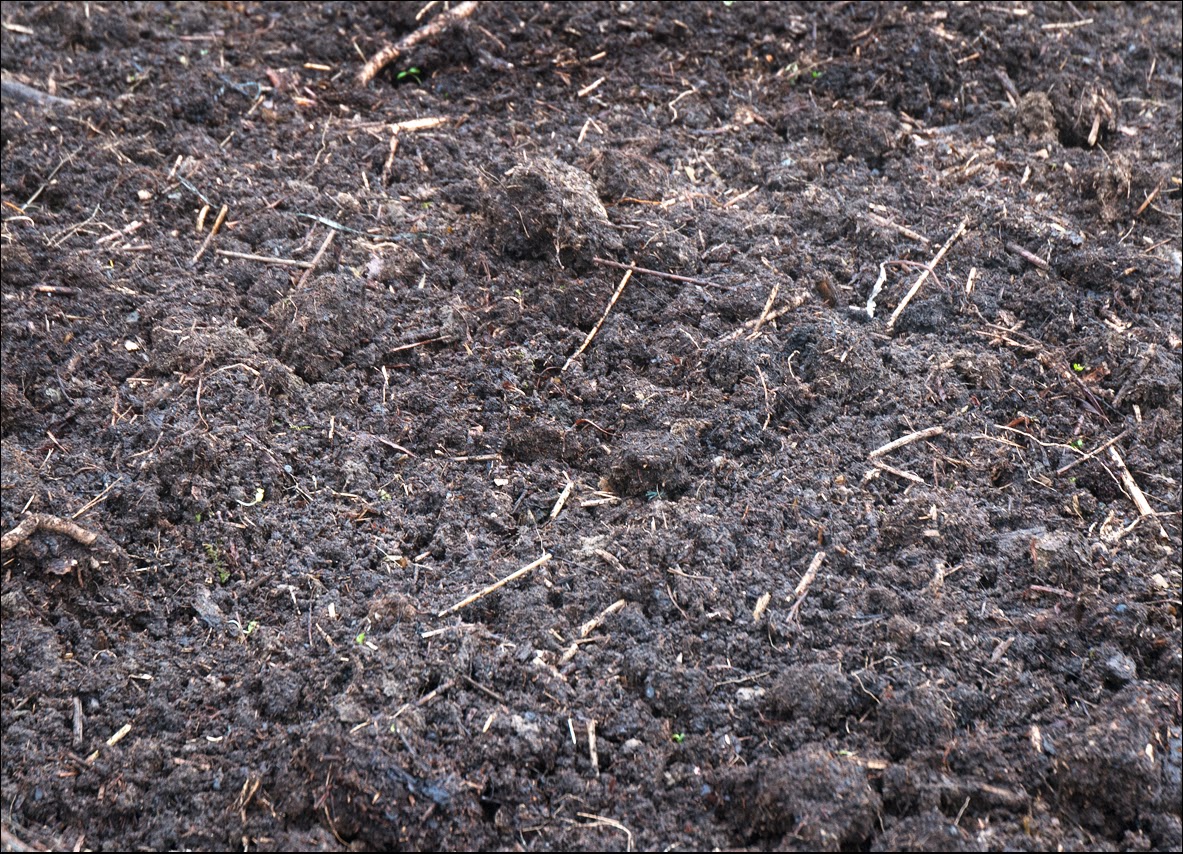 Posted by Duncan Darbishire at 09:19 No comments:

Bowing to popular demand I give in (a bit).

Spring is just about thinking about springing though we have had wintry showers a lot - hail and such. 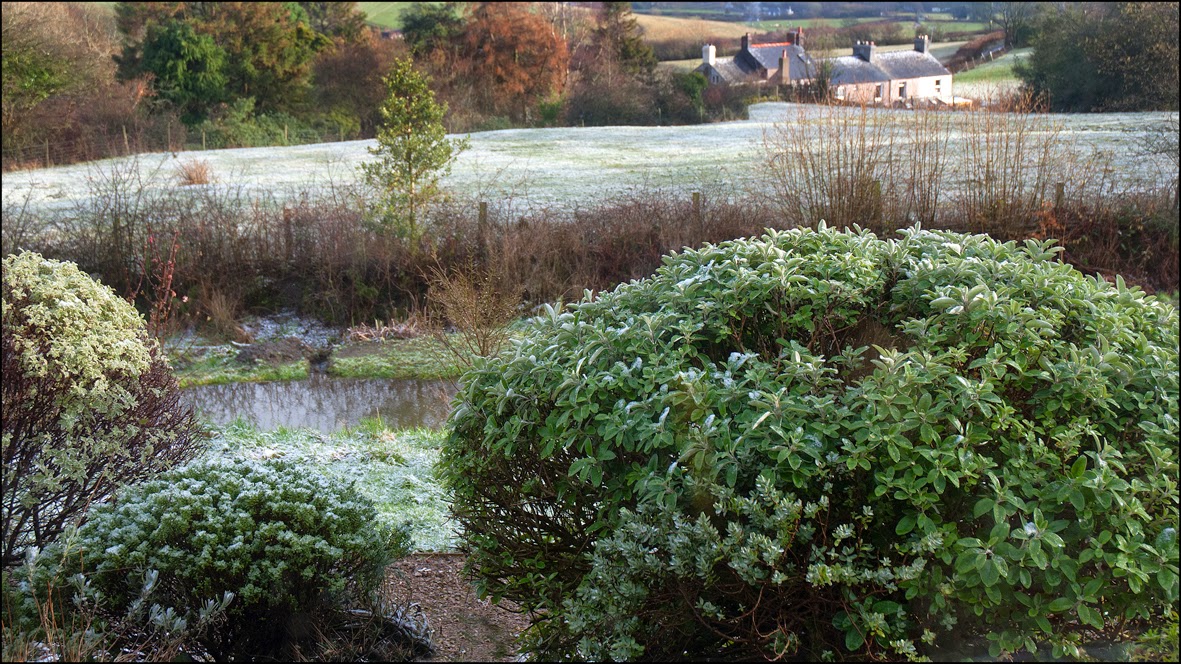 My brother and his wife came over and delivered his plastic heron to stand by the pond, deter other herons and protect our frogs and voles.
I placed it as shown - it had to be back a bit as I could not puncture the pond liner. 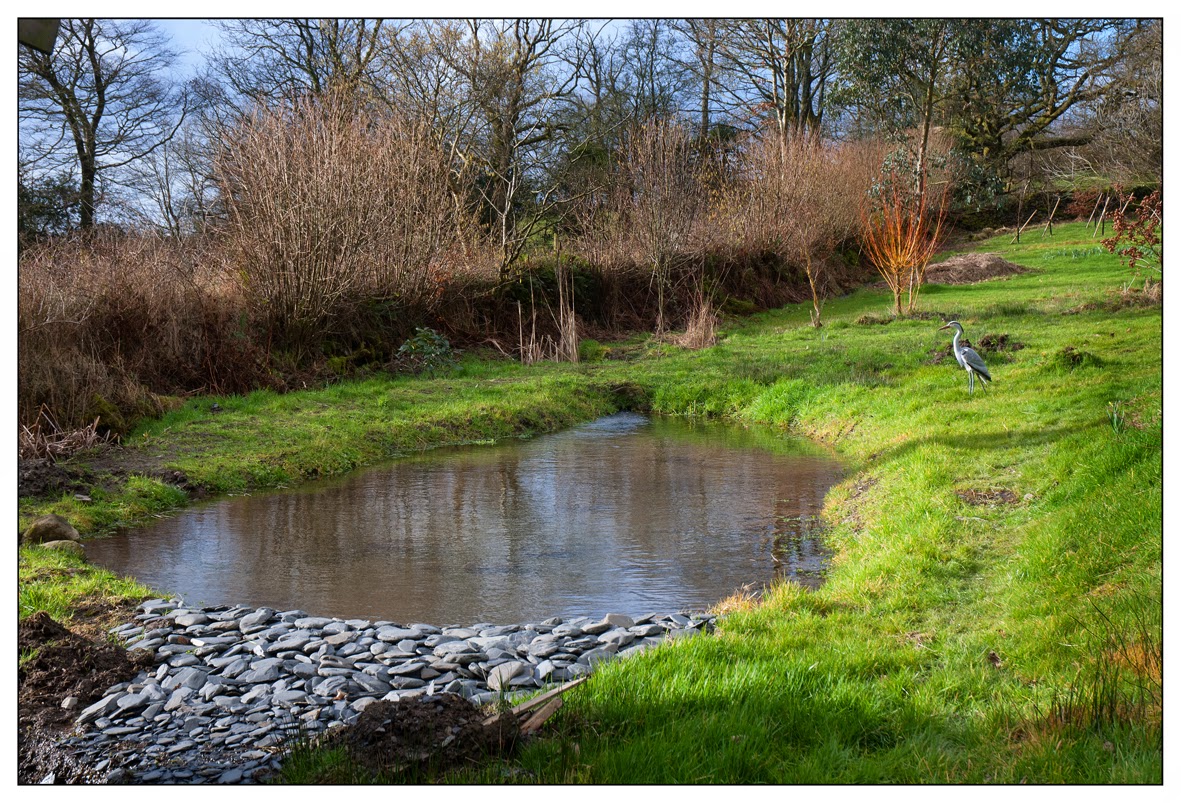 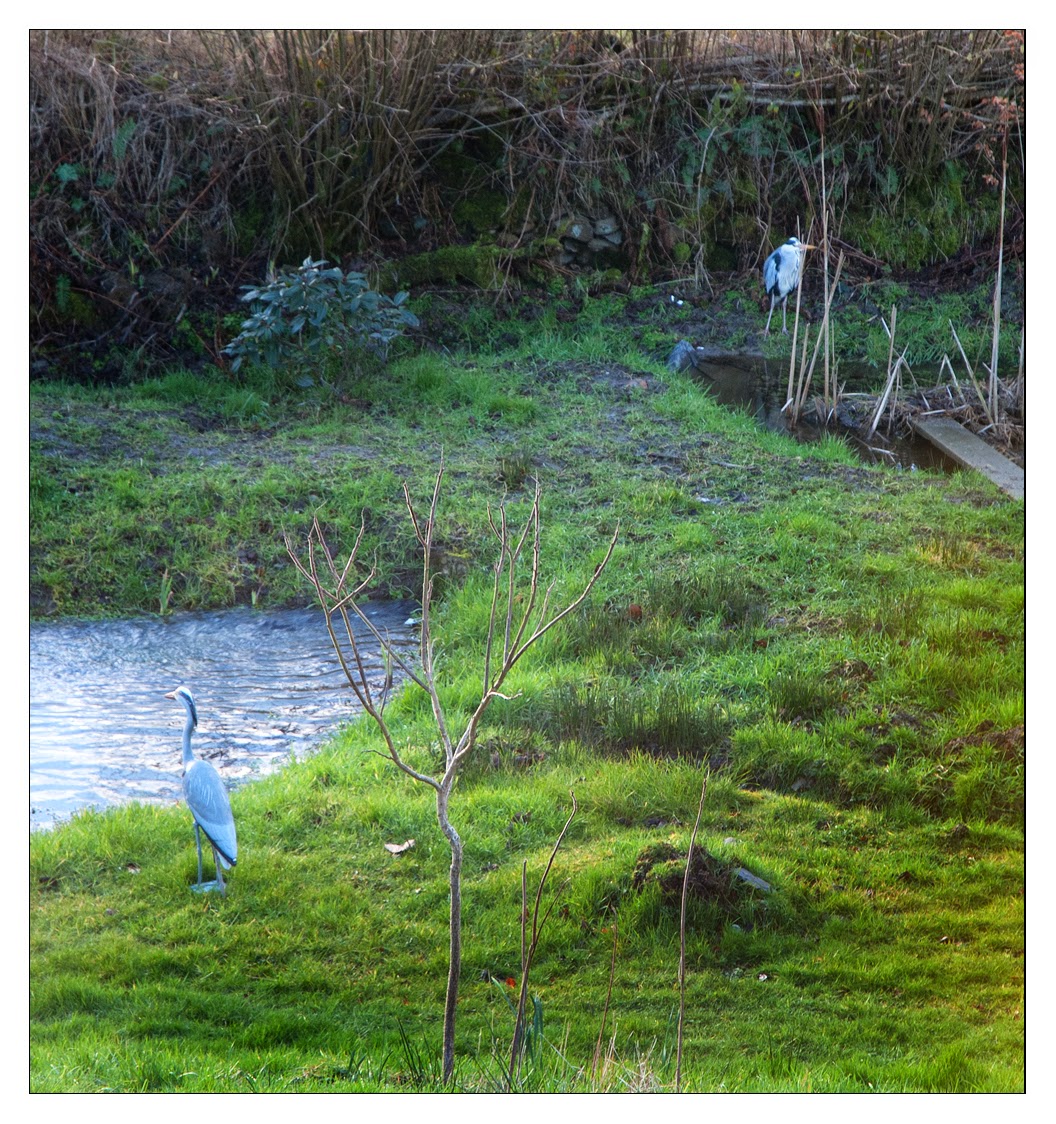 All was sweetness and light until the next morning when, looking out of the bedroom window I saw we had - two herons!
The plastic one on the lower left and the real on at the top right - very effective n'est-ce pas? (Yes I have the odd word of foreign languages - mainly I say "I am English and do not speak French or whatever.") (I know - typical Englishman.)

So, I have just scalped the lawns for the first time as the grass was dry - small mower set on mulch. Quite a lot of the garden is still too boggy for the sit-on.

Here are over pots of house daffs waiting to be out in the garden. I am not sure how well the paperwhites will do but time will tell.

5 squirrels and counting caught so far in the latest attempt at control - they have eaten all the crocuses on the banking - apparently a favourite food. So, what with rabbits eating the fritillaries and squirrels the crocs - phew! 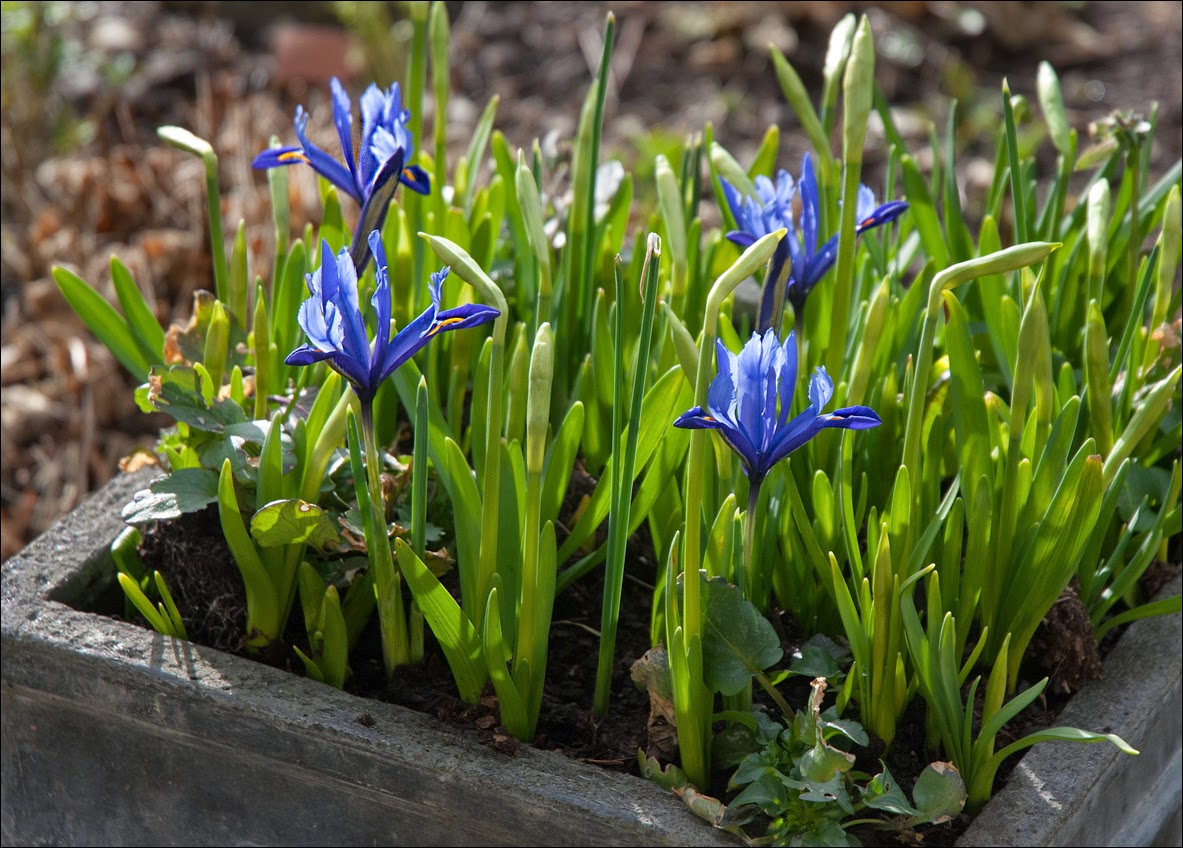 Other bulbs are, however, flowering like these delightful small iris and daffs. 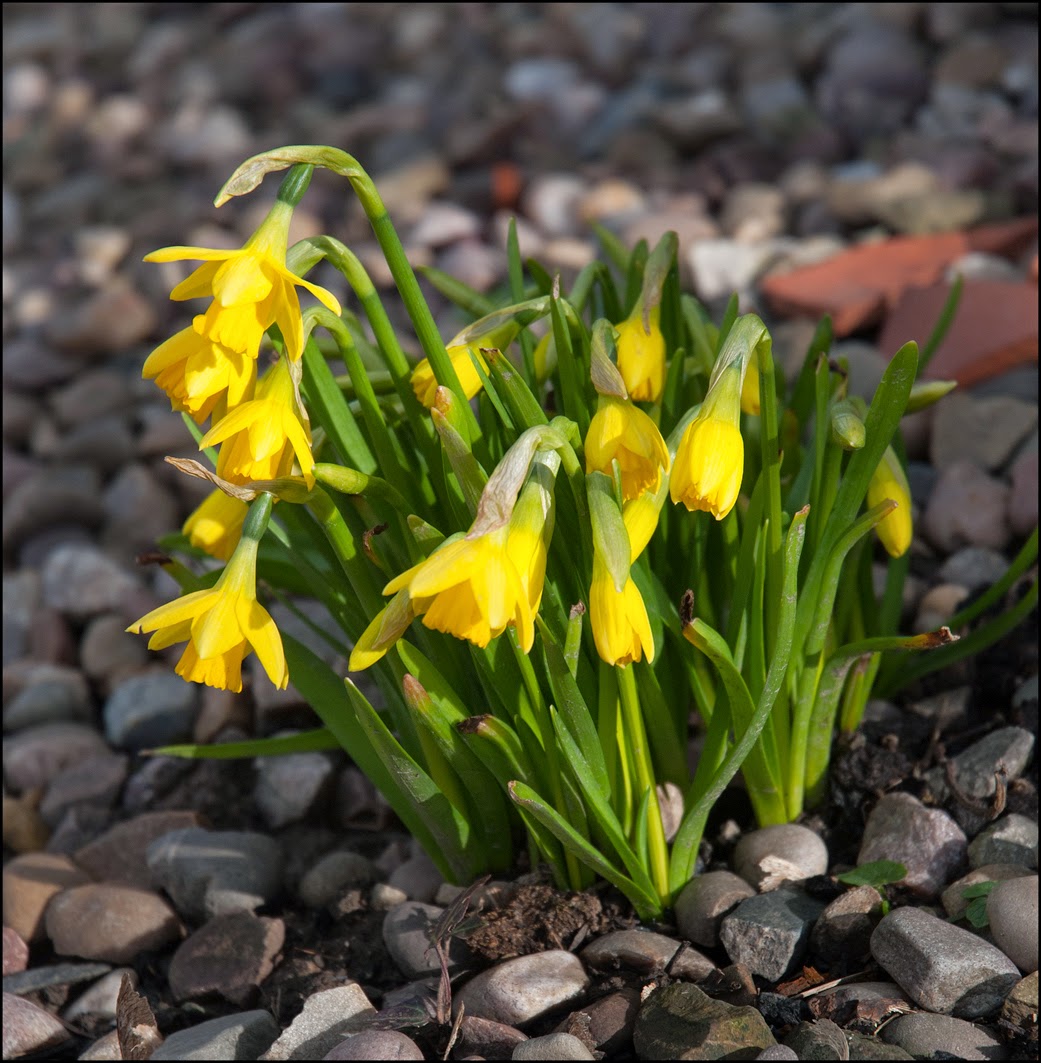 Then there are the hellebores - 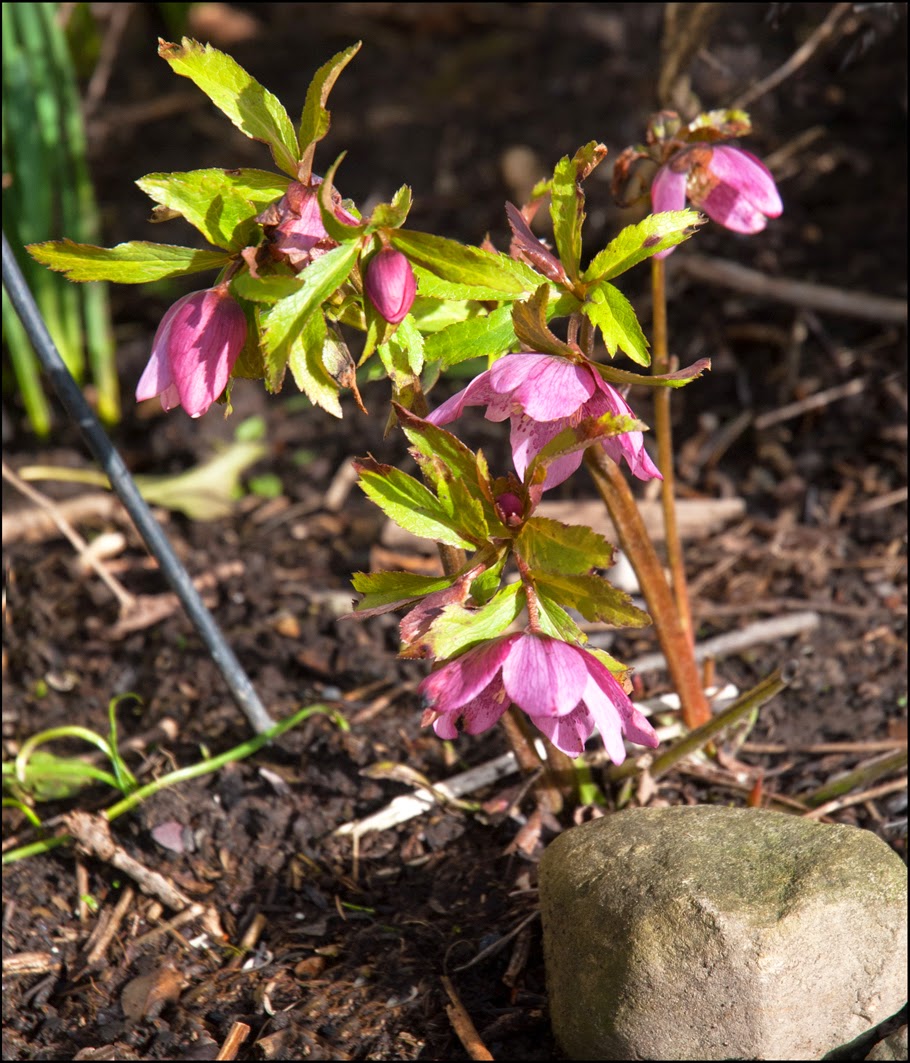 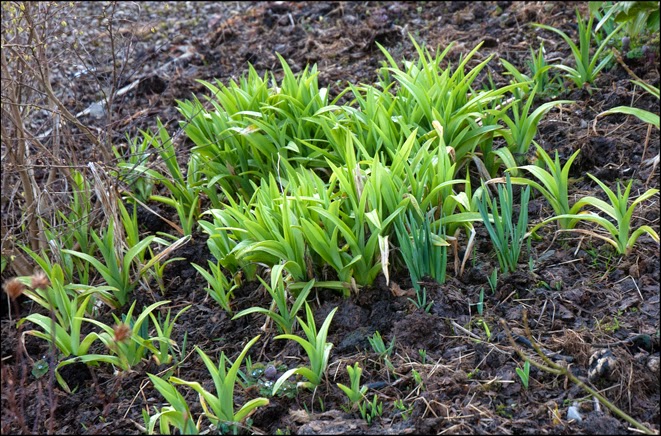 and finally the orange day lilies - thugs with tenacious roots. I have tried digging them out but there are bits of root everywhere so I may have to POISON them!! It is interesting that I cannot snuff out a squirrel but a day lily - no reservations whatsoever.

And for G and L who are getting withdrawal - COMPOST! There I have mentioned that too.

And I did not mention the chaffinch with deformed legs scratting across the paving but surviving - for now.

And I did not find my gold signet ring even with a metal detector.

Sad.
Posted by Duncan Darbishire at 10:10 No comments: