BEING CAUGHT AND CATCHING UP 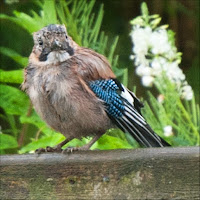 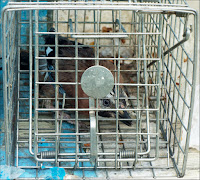 It its a tough life moulting one's feathers like this jay but to then get caught in the squirrel trap AGAIN! is just too much.

Back from a holiday in Pembrokeshire and this morning I am greeted at the back of the house by a half eaten young rabbit. The local cat has struck again I think. In fact the only thing on the garden camera is a rabbit - perhaps a posthumous movie?

The weeds are enormous - only taken a week - and there is much work to do. Everything in the garden seems to be growing at a amazing rate (except the eucryphia which looks a bit weary.) 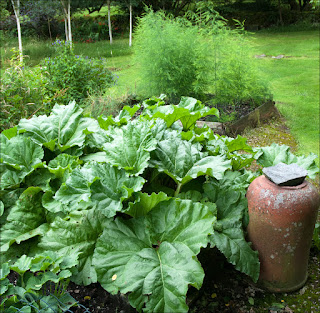 First day and trimmed bay hedge using secateurs not shears. The old raspberry canes have been removed, R has dead headed the roses and cut some rhubarb. The roses and raspberries have been fed with pelleted hen manure. I took some cuttings from the bay trimmings.
Last of the black currants made into a compote. (Great with ice cream or greek yogurt.)

The 'senecio' (brachyglottis) on the banking is over and clipped. R dead heading. I have cut and tidied the stream where it runs through the lawn and scythed part of the upper garden where R had noticed some pretty white flowers in the tangle - bindweed!

Tuesday and desperate rush to mow lawn before several days of wet grass, spitting as I went. R tidied rhubarb and weeded, I cleared around strangled fig on the banking. The rhubarb is looking good. 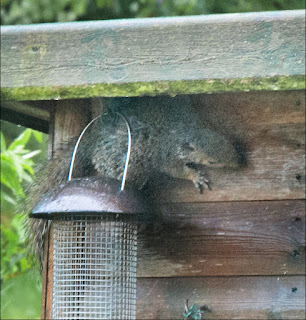 Then a bit of lightning and torrential rain, in fact so wet even the squirrels are trying to find shelter - this one clinging under the shed roof overlap. (Having stuffed itself with my peanuts before.) 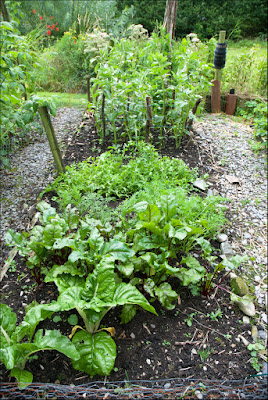 The veg beds looks good, a bit of chard, beetroot, carrots and broad beans. I talked with PB about this and the conclusion is, no digging, a layer of compost and I covered the bed with black pond liner to exclude light, keep the soil drier and warmer.
I shall do that again this winter though if we get the go-ahead for a house extension I may have to fill the space with herbaceous plants moved to allow the builder access.
Plants like the agapanthus and orange day lilies. 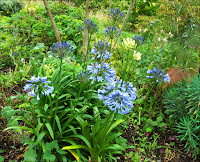 The cut plants, especially the red alstromerias, have been splendid. I did a vase with them, crososmia Lucifer (very red) and acanthus (Bear's Breeches) shown here. Unfortunately the acanthus is viciously prickly, a nasty piece of work and I am still pulling out spines. 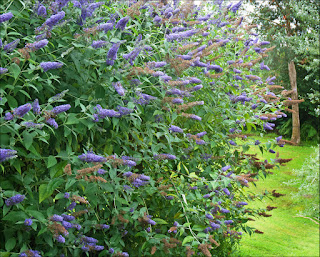 The buddleias have been bursting with flower and feeding bumble bees, not seen any honey bees and the butterflies are few. We have had the usual whites plus an occasional small tortoiseshell, red admiral and fritillary but nothing like most years - very disappointing.

Just back from the private preview of the Lake Artists Exhibition in Grasmere. (Brother looking well but stressed (President now)). We deliberately avoided Ambleside - a madhouse in the school holidays - and went via Red Bank, back via the west of the Rothay. Both narrow roads peppered with walkers (fun with a silent hybrid car) but little traffic - do not go into the Lake District in July/August now if we can help it - 20 million visitors a year and now a World Heritage Site.

Home, cup of tea and another look at the pic of new grandson born on the 26th
Posted by Duncan Darbishire at 18:10 1 comment:

My daughter gave me the book by Michael Pollan for my birthday. The first name that I came across was that of Montagu Don as a member of the Editorial Advisory Board - this in 1996.

It made me think of what gave me my love/hate relationship with gardening, the love of the garden and the despair when pests and weeds take over. (I get round the latter a bit by having wild areas). 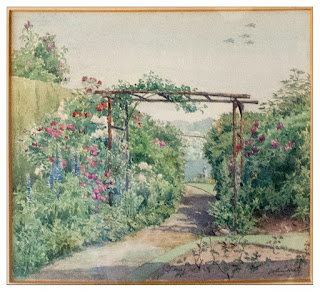 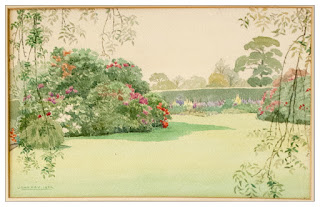 I have a watercolour on the stairs by my mother's father of the rose garden at his house in Liverpool at St Anne's Mount, Aigburth. These were painted between the wars and you can see biplanes in the top one. When they sold up - around 1936, they built houses on the garden. He was a keen gardener and later, when he lived in Bowness, kept bees. My mother also gardened and I remember as a boy mowing the lawns and raking the gravel at our house in Coniston. So, I suppose, something was passed on.
I am not a meticulous gardener - too many weeds, too lazy probably, and like things that self seed, like surprises when a plant appears in the wrong place even if it does not work. And I am pretty useless with fruit and veg - I try but . . .
Blackcurrants and plums are ok and easy but somethings eats most everything else. This year the blackbirds had most of the redcurrants and the strawberries were a disaster. I sowed chard and only two seeds germinated!

So why try and take our land of nearly two acres (0.8 hectare) and make a garden?

When we first saw the site it just asked to be shaped and planted. I took favourite plants with us and carefully made a bed in which they were temporarily housed - very temporarily as the builder plonked his concrete blocks and stuff on the top - so we lost the lot. 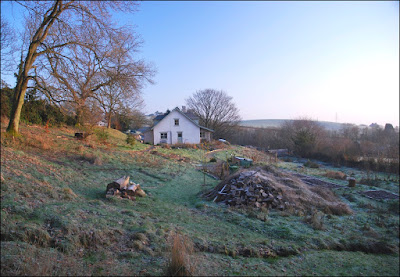 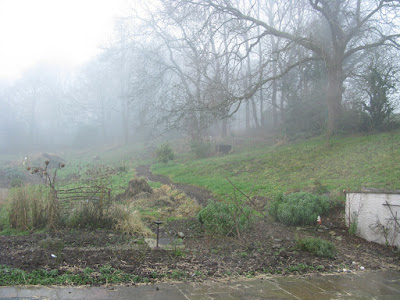 My sister-in-law gave me six or seven damson suckers and these do well (when the spring frost does not get to the blossom) and gifts of plants have helped immensely. We are still waiting for the Davidia to sport its handkerchiefs.

Now everything is so big, trees need pruning, in the winter ash branches crash down from eighty feet up, seedlings are out of control. Once we lived in an open site but now it increasingly looks like a clearing in the forest!

But I quite like that - we have created paths, dug a pond, made veg and fruit beds (still cannot work out why the raspberries are good this year but the strawberries are rubbish) and gaze up at the eucalyptus R put in as a four foot sapling, cricking our necks. 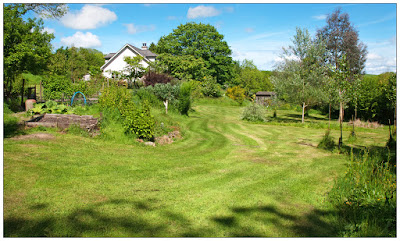 It is good to get down to things like gardening, in fact have just had to pop out to kitchen and get the bread going. As I use our 45 year old Kenwood chef with dough hook I wait till R goes out as it is noisy.
I make spelt flour bread - 300g white, 200g wholemeal, 1/2 teaspoon salt. Mix well. Put 1 tablespoon sugar in 300ml warm water and add 1/2 teaspoon of dried yeast. Let it get going and froth then add to flour in mixer bowl and let it rip for 5 minutes or so.

Butter well a bread tin (I had endless trouble to start with sticking loaves but a good smear of butter works well). Put dough into tin and then in a warm place to rise. When that is done I don't knock back, just into hot oven (220C Aga) 15 minutes uncovered, then 10 minutes covered with foil.
Turn out, slice off end, smear with butter and get indigestion.

Posted by Duncan Darbishire at 19:05 No comments:

Dead and dropped on the tarmac by the car, this mole or mouldywarp had been taken, probably by a hawk, possibly by a cat and left as I disturbed the predator. It must have taken a lot of animals to make a moleskin waistcoat. 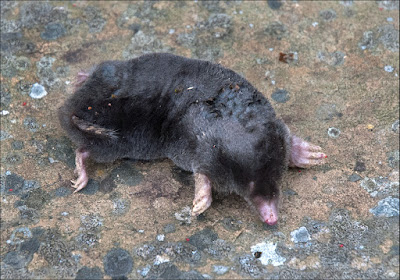 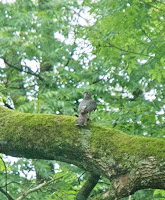 And then the guided missile that is a sparrow hawk takes a fledgling blue tit in front of my eyes (well, it wouldn't be behind them). This is not much of a photo but it was a snapshot through the window - only had a few seconds. 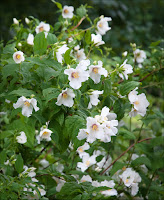 The big whites are staring to go over,
the Rambling Rector Roses and the Philadelphus. The deutzia is done and even the white willow herb starting to seed. I think I shall have to cut that one down as it self seeds a bit too freely. It is bad enough having its runners spreading through the banking grass. On the other hand it is lovely.

Sometimes plants exceed expectations - tall plants, the eight feet tall lovage, nine feet tall rue growing up through a cherry tree, (even the foxgloves are tall) cardoons and stipa gigantea, even one broad-leaved willowherb (yes a weed) at six feet - normally smaller and widespread. Then there are the Lilium regale, stuck in a pot for four years, this year they should have been small and in need of moving - but!

So bad back, R tells me to go easy - so what do I do - weed the whole place, trim box and sarcococcus etc etc (and take paracetamol) - but cannot moan - self inflicted problem. And now - a bonfire, some heavy mowing followed by a shower and some alcoholic analgesia (just a small Peroni.) 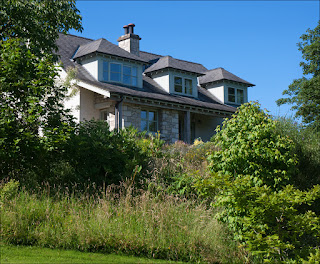 I will, soon, have to attack the lower banking as the grass is getting too long and I cannot use the excuse of letting daffodils build up their bulbs for next year.

The anthemis and self sown feverfew here light top a dark corner whilst Crocosmia Lucifer is blasting out its red. I put some in a vase in the church porch for the weekend - I wonder if anyone realised they had Lucifer in the church? 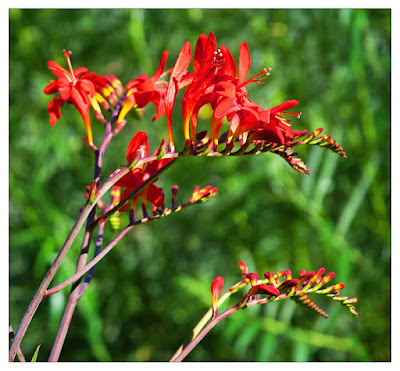 And then there are the ducks - by the pond. As we walk around one way the duck waddles ahead of us, just keeping out of range. Today I saw a cock reed bunting in the vegetation at the side of the water.

We have two nests of house martins though sadly no swallows this year. Sitting out is interesting as the feeding parents zoom past our heads.

Posted by Duncan Darbishire at 17:17 No comments:

The battle with the blackbirds goes on - I wish I had put in a fruit cage now - the redcurrants are decimated, blackcurrants going the same way and raspberries half eaten. Yesterday I caught a blackbird caught within the netting I had put around the fruit.The plums and apples look ok but the pears, greengages and to some extent damsons have fallen foul of the late spring frost. 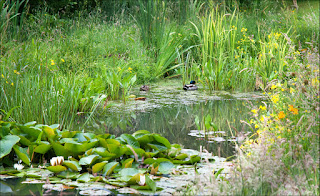 R's saga with the mallard goes on and then I caught them on the camera walking up the garden top the field, presumably on their way to the Mill Dam a third of a kilometre away.

Bad back! Its is not the scything that does it but the raking of the cut grass.

Bees have been mentioned - my daughter and her family have a guest hive in their field in Herefordshire. It would help with pollination? We seem to have mainly bumble bees. 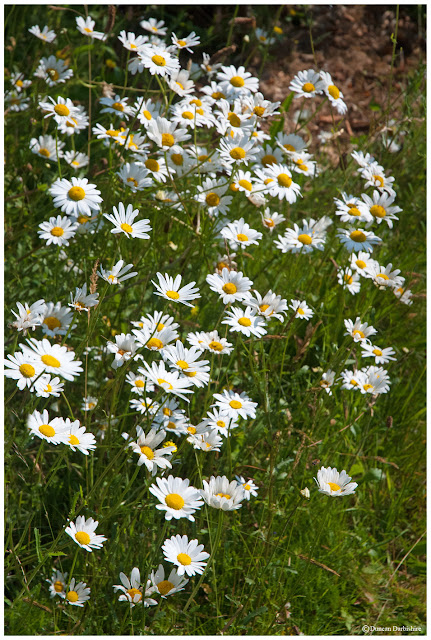 It is the season of Oxeye daisies - albeit wild they give a dazzling display.

Just caught a jay in the squirrel trap again. In the local paper their was an offer to take away (and cull) grey squirrels but if someone else is going to kill them is that much different from me doing it - I'd have still done 'em in.

Having to take a break as bad back - more pressure to get help in the garden - can still pick raspberries though (when I am not eating them).

And so to birdlife in the garden - the greater spotted woodpecker feeding its offspring thought the latter is as bias the adult.

Under the feeders the hen pheasant collects the cast off bits of peanuts and seeds. 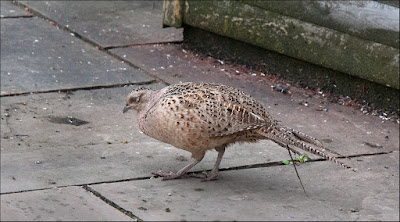 And she is guarded by her male half as she wandered through the roses. 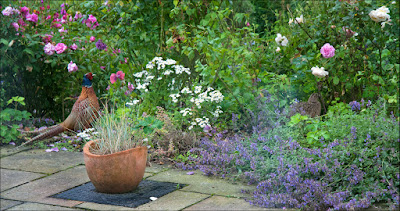 On the edge of the shed roof birds queue up for the feeders - a place I think might be very vulnerable to a passing sparrowhawk. Here a cock tree sparrow and a greenfinch.

Meanwhile there are fledgelings everywhere, waiting in shrubs and on fences to be fed. 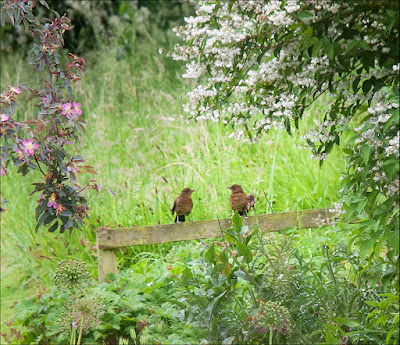 One joy of a garden is having flowers in the house especially pinks with their wonderful scent. 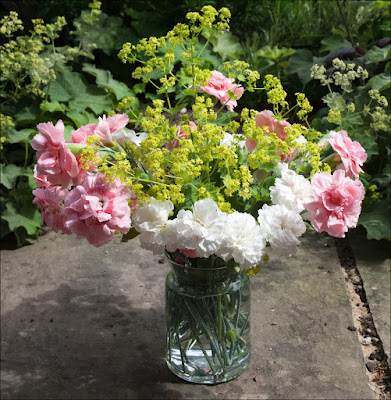