AND SO TO OCTOBER BLUES


R has gone for a walk around the block after planting about 100 of the 250 wild daffodils under the birches. She says the soil is all stone and water so we will see how they do. As she was out, and against knee op preservation instructions, I put 25 jonquils outside the new window in the extension.
Where have all the small birds gone? A month ago the feeders were inundated, up to ten at a time, now just the odd blue or coal tit, occasional chafing or sparrow. Perhaps they have headed south for better weather? (Except it is raining ther too.) 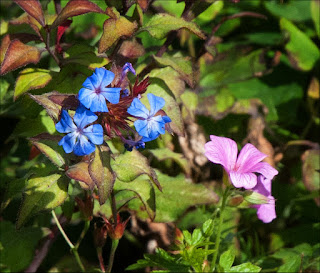 So when is a blue blue? I hear so many lavender and purplish flowers called blue but . . ? 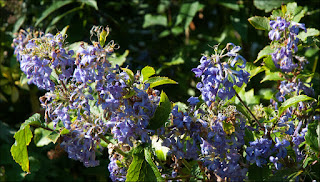 We let me start with Ceratostigma willmottianum. (Ignore the geranium having a second flush.) 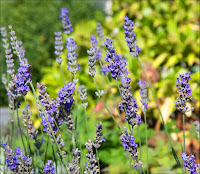 This is a true blue but lavender ('s blue, dilly dilly?) not a true blue - at least this one is not, nor is the shrubby clematis heracleifolia which is described variously as blue or purple. The lavender and the clematis look the same colour to me.

This time of year do bring other blues - winter is coming and the dark days and, dare I say it, the dreaded Christmas.

So to cheer myself up here are some glorious yellows, the colour of sun - helianthus and rudbeckia. 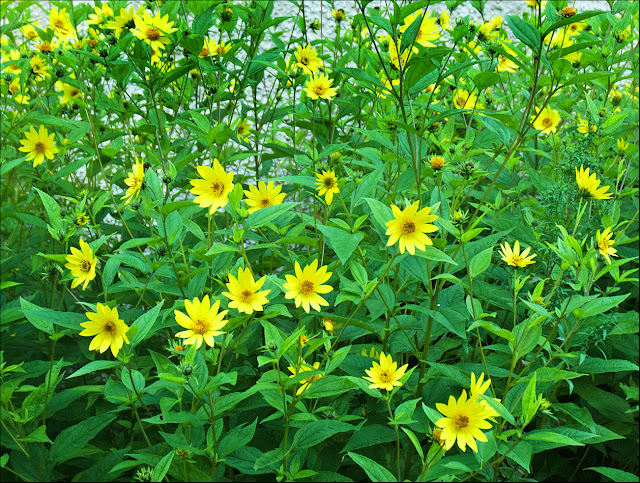 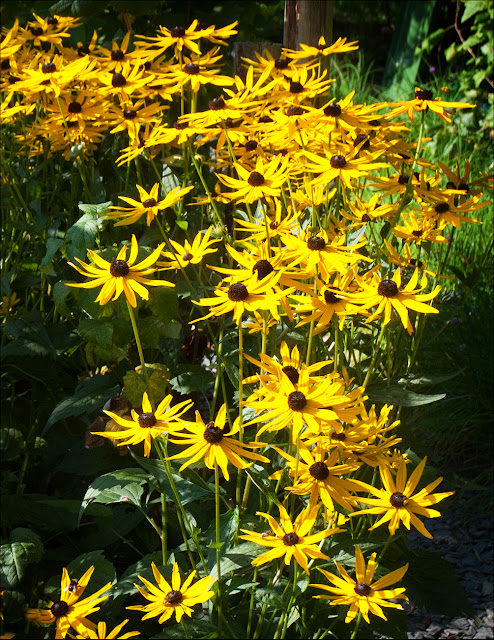 There that is better. 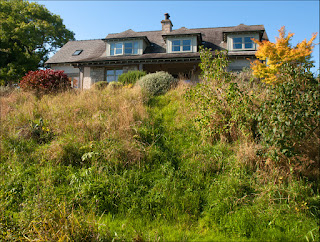 Meanwhile the garden is becoming an overgrown jungle - much to the delight of the rabbits. I suppose, given the winter and if I can get in the garden, we can drag it back to some sort of order. One early job will be to get rid of the nettles taking over the manure heap.

The pears on the ground are being munched by rabbits and the rat which leaves open wounds for wasps and especially butterflies. Suddenly there seem to be a lot of Commas in the garden.Elsewhere the white geranium, having regrown is flowering and appreciated by the hover flies. 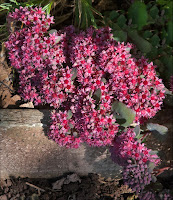 R's favourite small sedum is tumbling out of the new rose bed and the anthems are flowering again. Talking of the rose bed, it has been taken over by aquilegia seedlings. That is something that will need to be remedied. I mean where am I going to put the eremurus (fox-tail lilies) that I bought let alone the Tulip fosteriana Madame Lefevre. (A favourite of my mother.)

Now for an interesting tip - R burned her wrist on the Aga the other day so she turned the the alien on the kitchen windowsill, snapped a bit off and applied the sap. She says it stopped all soreness so here is our creature from outer space - an Aloe vera courtesy of HC. The wound is healing nicely. Perhaps all professional kitchens should grow one? 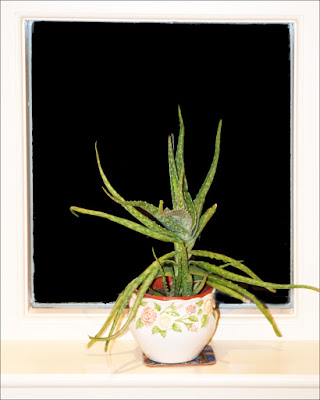 It is only Monday and I have written all the above - must be bored - so I planted 75m jonquils, pruned the yellow climbing rose and took 6 cuttings, did some dead heading (now my knee is sore) and brought in the camera. All rat and rabbits, one hen pheasant, one magpie, one pigeon and then - a badger!

Friday and it is raining again - torrents from heaven - this one is called Lorenzo (?after Jorge Lorenzo?).
All in all a blue week - lost my wedding ring somewhere. 😟
Posted by Duncan Darbishire at 09:09