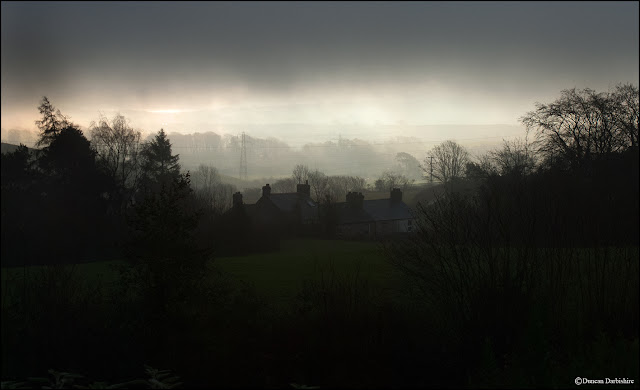 It its dark outside and dark across the world. One small organism has stopped the world.
But here in my garden on the hill plants still grow, flowers bloom. The first sweet violets are picked and in an egg cup in the kitchen, the first bumble bee is about.
It its clear that we should have planted the wild daffodils under the white birches in clumps or drifts rather than singly, but over the next few years they will multiply. We will just have to wait.
On Friday I mowed some of the lawns, those that were dry enough yet there are areas where the turf is so sodden no mower can go. 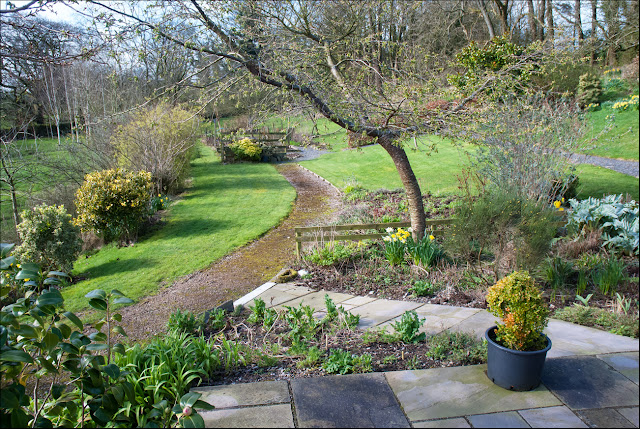 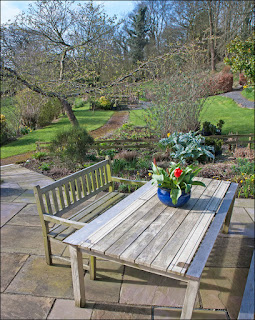 There is panic buying of lavatory paper in the supermarkets - what is wrong with a piece of string, knotted at one end, onto which squares of newspaper are threaded?
Having cancelled our holiday to the Outer Hebrides, hotels, b&bs, ferries etc - at least got our money back.
Spring is here despite everything conspiring to cancel it. The first red tulip is out in the blue pot. 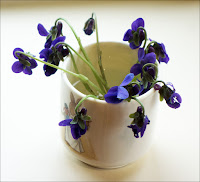 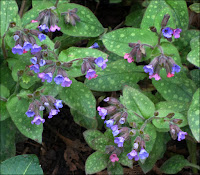 Sweet violets with their anaesthetic properties - smell them then try again, nothing the second time. Pulmonaria with its spotted leaves - this spotting is the same as TB infected lungs! Hence the name, also of a similar colour are the first forget-me-nots.

The quince just gets better and better. 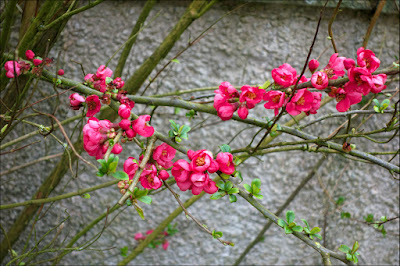 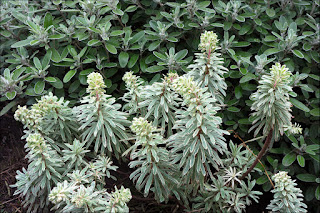 And white comfrey is early, euphorbias coming on fast.

Apart from that I have raised the canopy a lot on the magnolia grandiflora as R says she cannot see past it up the garden - and the daffs are splendid.

Which leaves another load of rhubarb, nothing in the asparagus bed beyond yet as it is too early. 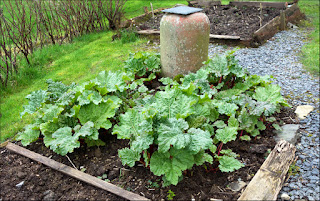 The birds are singing, the drakes are fighting over the duck on the pond, the virus goes on . .

Views are gone -
no lake, no mountain,
no tarn, no crag.

They took the sheep,
they did, farming ceased.
wilding the word.

One small bat,
one mutation,
a pandemic.

So we went,
never to return,
the world recovered.

Wilding is the word,
self-inflicted
is the way.

No one says the virus,
Coronid 19
is the cause?

It does not matter -
on man free Earth
none say anything.

Better news is that I have finally lit the bonfire, Sam the gardener came and will come again.
Also, I layered into pots two small branches of our lovely scented rhododendron - the one we bought near Matlock. They are now separate plants and one has a bud.

Posted by Duncan Darbishire at 09:05