We had a rumble last night around midnight - I thought it was snow coming off roof but on looking this morning the snow is still there. Then I heard on the news and via a text from I in Coniston that we had an earthquake last night centred on Coniston - how does that fit with storing Nuclear waste at Sellafield! The local wit has named it the Kendal Mint Quake!
There we were, nicely asleep in bed, and then the earth moved for us and all it did was wake us up - we turned over and went back to sleep. 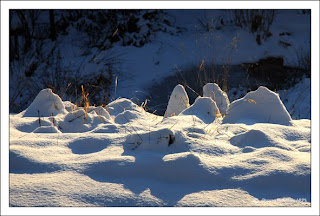 A few years ago we were on holiday on the Isle of Colonsay when we heard that there had been an earthquake - back home!

We are still in freezing conditions with snow cover - it has not melted except in odd places where it gets the full sun and has been partially cleared.

Walking around the garden visitors have left trails - rabbits eating at the uncovered grass on the banking, many birds and the unmistakeable single file spoor of a fox -presumably hunting the rabbits. There are scrapings from the grey squirrel and the jays who have been desperately trying to remember where they put the hazelnuts and peanuts earlier in the year.

The coal tits have also been burying seed but they cannot remember where they have put the seed or, perhaps, even that they buried anything. Sometimes I feel a bit like that - now where is the .....?

Posted by Duncan Darbishire at 08:38